Angels in Vein - Giving the buzz is due

Angels in Vein is one of the hottest new band around these days. And you can only applause their capacity to create a buzz all over the world.
And, as surprising as it can be, if you missed them so far let me make introductions. 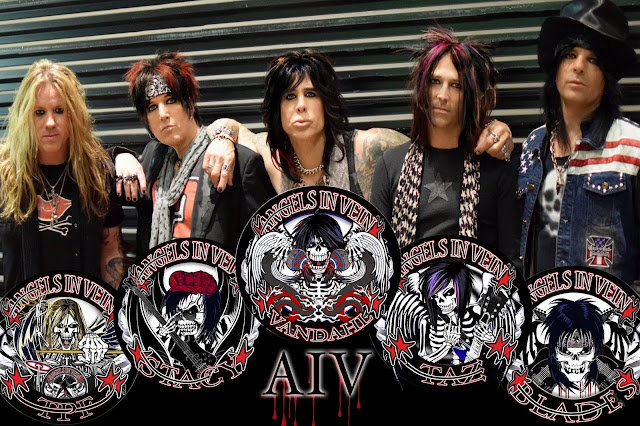 If the band was able to create an immediate buzz it's because all members have a long history in the Hard Rock scene since the 80s. At first Chris Vandahl (Cherry St., L.A. Guns) and Todd "Taz" Anthony (Cherry St.) joined forces again to record demos and then invited Stacey Blades (Roxx Gang, L.A. Guns), Eric Stacy (Faster Pussycat, Bubble) and Troy Patrick Farrell (White Lion) to come on board.

In late May a facebook page appeared and the Hard Rock web community went frantic. And with nothing more than a few pictures and a video teaser (see below).
Pretty quickly they gained thousands of fans/followers and good press coverage. Their plan was to release a single entitled "1973" along with a video during the summer but fans demand was so urgent that they decided to make available the song used on the initial video teaser (No One Gets Out Alive). And even before that the band was smart enough to produce merchandising for their eager aficionados and go with the momentum.


With them everything become massive even when they probably would prefer not. Recently Eric Stacy left the band acrimoniously and cause a bit of a buzz again. Adam Kury former Candlebox member is already replacing him as a bass player though so don't be worry too much for them . Especially since they never get onstage altogether so far. Well, you can meet more people on social network than in a live venue these days anyway. But I guess they are willing to do it as soon as they can. Cause that the thing with busy musicians they are touring with different bands and it makes the schedule a bit difficult at times.

With such a pedigree you are probably expecting something, sonically speaking. To sums it up you could say it's in the same path than Velvet Revolver 1st album but with a better sound production., both tracks being quite effective and in-yer-face, full of vocal effects, wah guitars and over-compressed mix like it's common in music production nowadays.

If Angels in Vein stick to their plan they should continue to digitally release a song from time to time before putting an album in CD format. So in the meantime have a listen on spotify or the platform of your choice to make your own opinion, follow the band on fb if you have an account there and let's see if we could brag about being "one of the first 4000 to discover them" in 5 or 10 years on.

Before they hit a stage near you, let's have a look at this video together, it'll be the closer you get to the real thing.

all pics by Kelly VanDahl
Publié par Is it loud enough ? à 10:11